R.I.P. Davy Jones of the Monkees

I was saddened today to learn of the death at age 66 of Davy Jones of The Monkees. Please, take a minute and a half to watch Davy's completely charming audition tape. I believe the offscreen voice belongs to producer/director Bob Rafelson.

Posted by Unknown at 5:12:00 PM
Email ThisBlogThis!Share to TwitterShare to FacebookShare to Pinterest
Labels: Davy Jones, death, The Monkees

Always working for a concept: Father Guido Sarducci and the search for God


Hello, long-neglected blog readers! Recently, while browsing through Saturday Night Live clips online, I found a remarkable sketch from the show's 1983 season called "Airport Friend." Despite that unpromising title, it contains one of the more profound ideas I've heard on a comedy show.

In this scene, Father Guido Sarducci is stranded at an airport, waiting very impatiently for his flight. He reacts badly to news of an additional delay, throwing down his bag and kicking an ashtray. Enter Bob Armstrong (Jim Belushi), a pleasant-tempered doofus in a tacky suit. The fictional airline, TransEastern, has paid Bob to be the priest's "friend" during the delay. At first, Sarducci is brusque with the phony friend and tries to shoo him away, but eventually he takes pity on the man, who is just trying to do his job. Belushi explains that he works for jerks. Sarducci says he works for jerks, too, at the Vatican. Everyone in the world, they agree, works for jerks.

The exception is the Pope, who works directly for God. God isn't a jerk, says Sarducci. God is a concept. Yes, this is a phrase that also crops up in John Lennon's song, "God." And that's what leads Father Guido Sarducci to his epiphany: "You can put a man on the moon, but we'll always be working for a concept."

Recently The AV Club did a nice article about profound comedy. The usual names came up -- George Carlin, Richard Pryor, Louis C.K. -- but one name absent from the roll call was Don Novello a.k.a. Father Guido Sarducci. Honestly, Novello has probably made me ponder the big questions of life and death more than any other comedian has. I've listened to his 1986 album Breakfast in Heaven dozens of times. I wish I could find a video for the title track from that LP, a thoughtful and very funny monologue about the afterlife. But in lieu of that, here's Father Guido's concept for a "five minute university" in which he teaches us that "God is everywhere. Why? Because He likes you."

The AV Club's Nathan Rabin once pointed out that the Sarducci character "represents the very humane, approachable face of the Church." He's the one comedian who makes me hope that God actually does exist.

The Funday Sunnies! Comics for the terminally depressed!

My main man, Zomby, has been on a vision quest in Nepal these past few weeks, which explains his near-total absence from the blog. When (or if) he gets back, I'll be happy to bring you his further exploits. In the meantime, I thought I'd bring you a variety of Sunday comics, each one with the subtly dispiriting, downbeat antihumor of Zomby!

Enjoyment is not the proper reaction to these comics, per se. You really should be shaking your head and sighing deeply after each one. 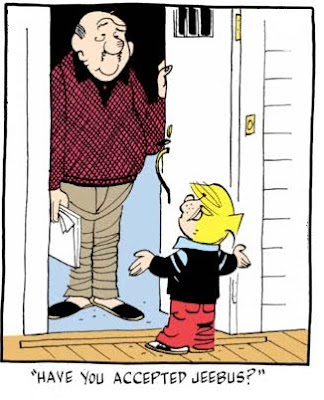 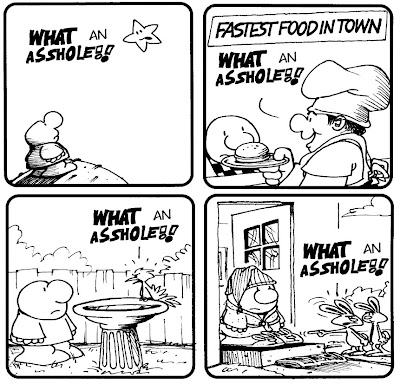 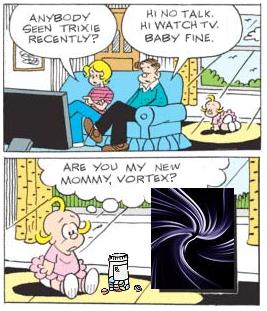