How ZOMBY spends his days off 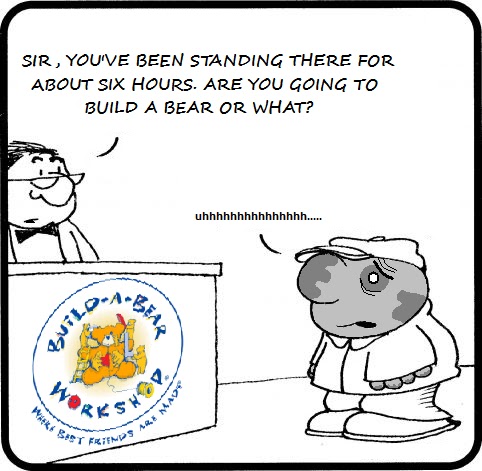 ZOMBY has some... uh, interesting hobbies 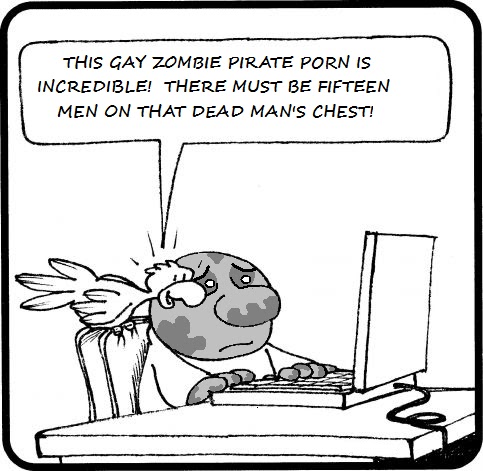 It feels nice to do a new ZOMBY! cartoon. I hadn't done one in a few months, so I thought it was time to bring him back. Hope you enjoy.
Posted by Unknown at 3:24:00 PM

My therapist stood me up. That's not a joke.


It sounds like the setup for a joke in Woody Allen movie, but it actually happened to me this week. My therapist did not show up for our weekly appointment. Actually, the office she shares with another doctor was totally locked and empty when I got there. I stood out in the cold, knocking on the door for a few minutes, but to no avail. I have no idea what happened. Maybe she's ducking me. Who knows? I could have been the patient who finally drove her out of the therapist biz. But I kid my therapist. She's actually very nice -- a thin, spiky-haired woman of about 50 with a heavy Polish accent and the wardrobe of a bohemian art teacher. At our last session, she had dyed her hair blue to match her outfit. No kidding.

Anyway, since I live alone and have very little social life, my therapy sessions are pretty much my only opportunity each week to interact with another human being in person and speak as myself. Naturally, when speaking to coworkers or relatives, I have to be on my best behavior. It's very nice, then, to have an hour a week to say whatever I want and speak freely.

Well, guess what? Since I didn't get to have a therapy session this week, I'm going to treat this blog as if it were my therapist's office and you, dear reader, are going to be my therapist for the week. I'm going to say whatever comes into my head, and you're going to nod and say things like "Mm-hmm" and "Very interesting. Please go on."

Do you think you can handle that? Good! Let's get started.

We only have an hour here, so you're going to want to keep at least one eye on the clock at all times, the way a real therapist does.

I usually start out each session by saying how my week has gone. Well, citizens, it was sort of a rough one for me even though nothing much of note actually happened. Work has slowed down to a crawl lately, which puts a damper on my bank account. And naturally, now is the time when seemingly everything I own has to be repaired or replaced. So more money is going out than coming in currently. I think/hope/imagine/pray that the situation will be better in a few months, but it does sort of get depressing to look at my recent bank statements. I really ought to have a better-paying, more stable job. Even my immediate supervisor has said so. I've basically taken a temp job and managed to make it last ten years. I should probably aim a little higher.

The great thing about my job is that, for the most part, it involves very little interaction with these people... or any people. I can just put on my headphones and listen to podcasts all day while doing my work, which is great. The pay is lousy, though, and it's sort of humiliating to be in such a menial, low-level job for a decade.

Why don't I try for something better? Well, for one, I'm not the least bit ambitious, at least not in that way. I've seen the people who get promoted at my company. Many have come through my department. But they're driven by a kind of hunger I just don't have. They hear about an opening for "regional associate managing project director" or some such thing, and they go after it like a dog devouring a T-bone steak. Meanwhile, I can't schmooze. I can't network. I can't self-promote. I just can't bring myself to do any of that stuff. I shudder just thinking about it.

So if the corporate thing isn't for me, why don't I quit my job and pursue my dreams? After all, it's not like I have a family to support or anything. But here's the sad truth: I don't have a dream. There's never been anything I've wanted to do as a career. Not one, even when I was a kid and too dumb to be disillusioned. I'm just a dabbler. I dabble. I've tried all sorts of creative pursuits, including this blog, and they're sort of fun and fulfilling. But I've never stumbled across anything I would describe as a passion. I have interests but no passions. Wow. That sounds just awful, but it's the truth.

Ultimately, that's what makes it really difficult to keep going. I have no goals. There's nothing I really want. And that's the essence of life, isn't it? Wanting stuff? The same goes for relationships. I've had maybe five dates in my entire life and never anything close to a girlfriend. But it's not like I've put a whole lot of effort into that arena. I have no dating skills, and I know from my few disastrous dates that I'm not boyfriend material. I don't think I'd really want a girlfriend, and the idea of being married or having kids scares the life out of me.

So what do I do then? Work a crummy, low-paying job and live alone for a few more decades until I finally die? Yikes. That doesn't sound too appealing. That's the upshot of all this: I'm kind of out of options. I've seen and done as much as I want to do, and there's still so much time left. How am I going to fill it?

Well, well! Speaking of time, it looks like ours is just about up. This has been a great session, doc. I really got to express some stuff that's been on my mind lately. Thanks for listening. Same time next week? Super.

ADDENDUM: I feel I should add a little tag to this article for anyone who reads it and thinks it is too dark or depressing. What you have to understand is that I use my therapy sessions to vent all the negativity that builds up in me over the course of the typical week. Once I've said all this terrible stuff, I usually feel much better. As odd as this might sound, I would liken it to an exorcism. The therapist is the Max Von Sydow to my Linda Blair. This week, I'm asking you to be my Max Von Sydow. Thanks.


Let me explain this one a little bit.

Apparently, an Icelandic magazine ran a comic in 1949 with a character who looked incredibly like Homer Simpson.

Here's the Buzzfeed article which alerted me to the existence of this comic.

What I have done is take the panels from this particular comic and turn them into an animated GIF, thus creating the oldest animated Simpsons episode in existence. I want you to imagine that the show was originally just about Homer and his misadventures in wood chopping. 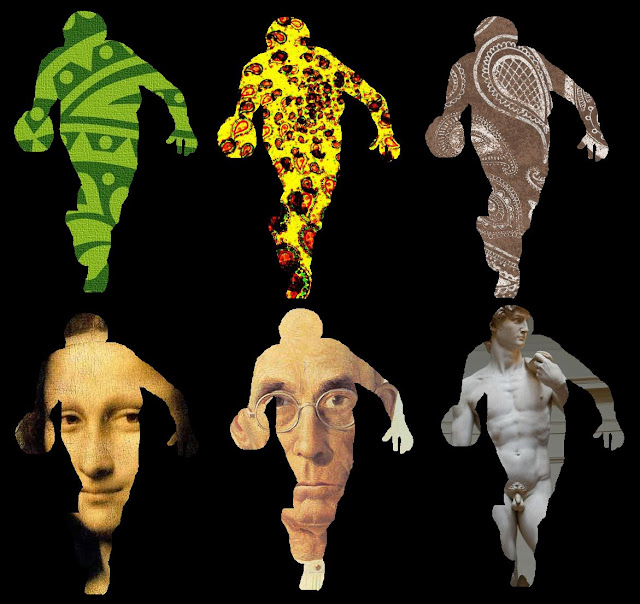 This is just a little bit of Big Lebowski fan art I created, based on the famous picture of Richard Nixon bowling.
Posted by Unknown at 4:02:00 PM 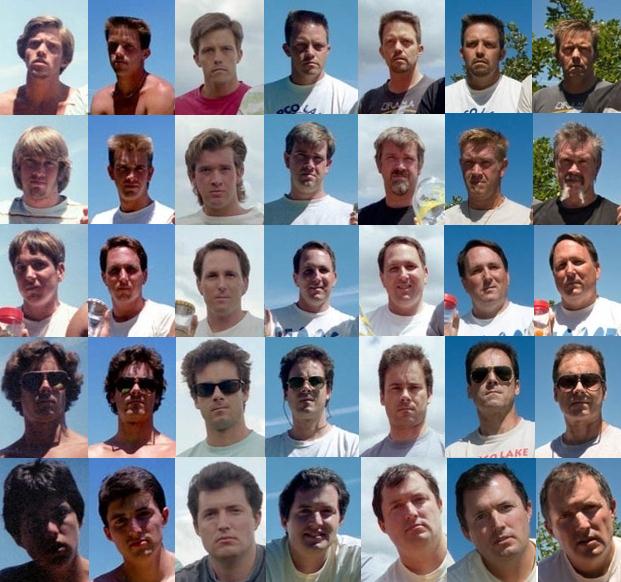 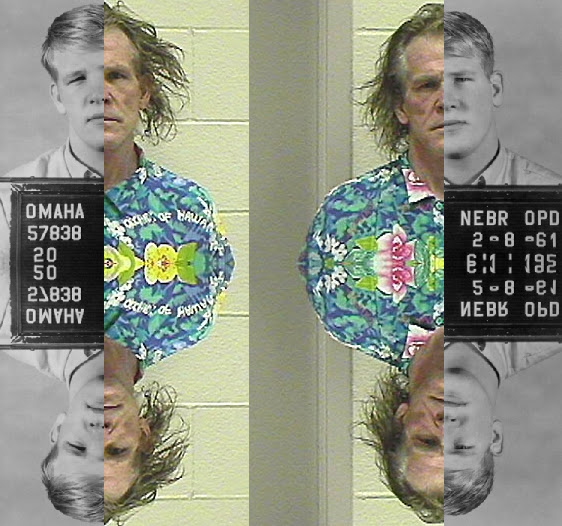 I'm a produced playwright! Who knew?

So here's what happened.

A couple of nights ago, I started seeing that there were a lot of TV commercials for the upcoming DVD/BluRay release of Disney's Peter Pan. I thought this was as good a time as any to write an article about that film and about the Peter Pan myth in general -- something I may still do in the future. Anyway, I was pretty sure I'd already written a mini-review of that movie on a message board somewhere, and I went to Google to find it. I never did, but I accidentally found something even more interesting in the process.

Apparently, in 2011, a script I'd written back in the 1990s called The Rocky & Bullwinkle Horror Picture Show was actually performed on a real stage by real human beings as part of something called the KC Fringe Festival in Kansas City . As you might guess from the title, the script is a crossover parody in which that lovable cartoon moose and squirrel, along with other characters from their series (including Boris Badenov and Dudley Do-Right), act out The Rocky Horror Picture Show. The script was something of a viral hit back in the era before Google, Facebook, or YouTube even existed. And I guess, it's had a life of its own since then.

Here is the article which alerted me to the existence of this show.

And here are some photographs of the actual production, along with my guesses as to what's happening in them based on my own memory of the script.

This is all really trippy -- seeing people actually do stuff based on a script I wrote as a joke years ago. It's one thing to sit down at a computer and write that the show begins with a kazoo fanfare. It's quite another to learn that people really did play a kazoo fanfare at the beginning of the play.

What can I say? I'm baffled yet flattered. It's a funny old world sometimes.

The whole gallery of photos is here, if you're interested.

And did someone ask for a clip? No?  Well, here's one anyway.