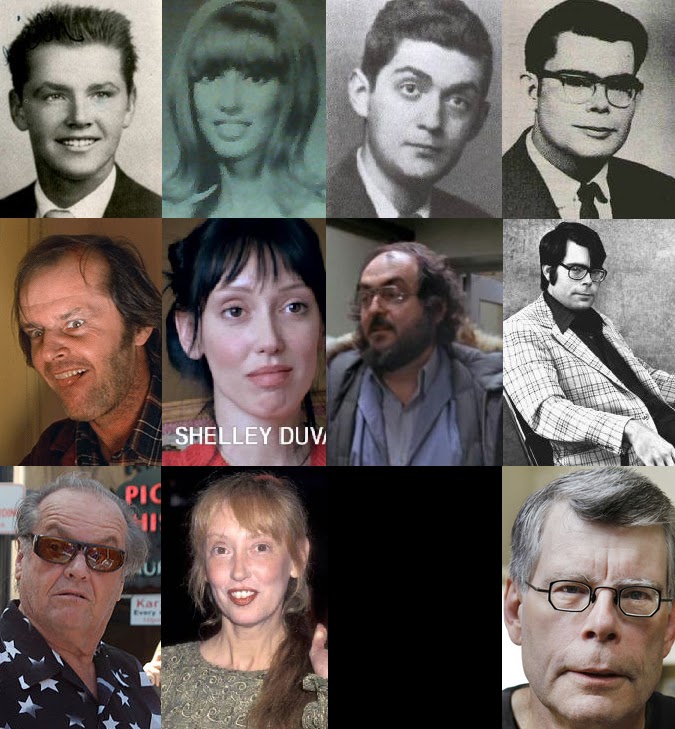 In case you missed Time #1, it's here. The first one was based on a series of vacation photos taken by a group of friends. The second one, I think you can guess. I don't know why, but I've always been interested in how faces change over time. That used to be something I drew over and over again as a kid. I'd draw a character, then show him ten years, twenty years, fifty years later, etc. I suppose these little collages are my way of returning to that.
Posted by Unknown at 3:21:00 AM
Email ThisBlogThis!Share to TwitterShare to FacebookShare to Pinterest
Labels: art, Jack Nicholson, movies, original artwork, Shelley Duvall, Stanley Kubrick, Stephen King, The Shining, time


Perhaps you've noticed some changes on this blog lately. You'll soon notice more. Dead 2 Rights was originally set up as the official blog of Wayne Kotke, a fictional character I created and portrayed for almost five years on the Mail Order Zombie podcast. In the beginning, I made an attempt to write the blog "in character" as Wayne and include as much zombie-related content as I could.
Over the years, though, I strayed further and further away from the original premise and just started writing about whatever interested me. The zombie references became less frequent and more perfunctory with each passing year. And now... well, they've come to a stop altogether. Wayne Kotke was a character created especially for Mail Order Zombie, and I have decided that he should expire along with that show. MOZ airs its final episode on Thursday, April 25, and that's the last you'll be hearing from Wayne.
From here on out, Dead 2 Rights is my personal blog and will be written under my own name. All the old content is still here, so if you want to look for Zomby cartoons, you'll still be able to find them. Who knows? I may even create more cartoons with that character in the future. But for the most part, D2R will be about my own life, opinions, and interests. I hope you will join me as the blog enters the next stage of its evolution.

Goofus and Gallant marry, ending decades of speculation about their relationship


Opposites really do attract after all, as it turns out.

Goofus and Gallant, the famous cartoon pair who have demonstrated the "dos and don'ts" of etiquette and safety in the pages of Highlights for Children magazine for over 60 years, have married in a small ceremony in Maine. The wedding, which they announced to the media through their publicist, ends decades of rumors and innuendo about the renowned twosome.

"What can I say? He completes me," says Gallant, while sipping a latte in the small condo shared by the duo. "I guess I've always been attracted to the 'bad boy' aspect of his personality. I think it's the side of myself that I've never been able to express. I sometimes wish I could be as free and uninhibited as he is. He's introduced me to so many new things. I'd say Goofus has definitely widened my horizons."

"Yeah, among other things," says Goofus, snickering like a naughty schoolboy.

This give-and-take is typical of the pair. It is precisely this kind of chemistry which has kept their relationship working for so many decades. The spark between them was apparent from their earliest days working together.

"I had a lousy upbringing," Goofus says in one of his more reflective moments. "My parents ignored me, so I acted out to get their attention. There was very little structure or discipline in our household. So when I met [Gallant], I thought, 'Finally, here's a guy who has his life together.' I don't know. Maybe at first he was like a surrogate father to me, since my real dad was a drunk who was gone half the time. I mean, of course, we had to play up our differences in the cartoons. But after work, I'd find myself thinking up excuses to spend more time with him. And, well, things kind of developed from there."

When asked whether the announcement of their same-sex marriage would ignite any sort of controversy or possibly harm their careers, Gallant is idealistic. "The reason we decided to go public with this is that we felt it would be wrong to keep it a secret. We didn't want to live a lie, because that would send the wrong message to the very audience we're trying to reach. Whatever the fallout from this may be, we'll know that we've done the right thing. This is our little statement about the importance of marriage equality."

Goofus, typically, is more blunt. "The Highlights people have known about us for decades. I mean, how could they not? It's not like we've tried to hide it around the office. If they fired us now over this, they'd be revealing themselves as complete freakin' hypocrites. And you can quote me on that! Let the chips fall where they may. Besides, print is a dying medium. If they don't want us after this, who needs 'em?"

The Goofy Gophers, meanwhile, are also considering a same-sex union but are apparently stalemated over who should carry whom over the threshold. At press time, neither Mac nor Tosh appeared willing to budge on this issue.
Posted by Unknown at 7:05:00 PM
Email ThisBlogThis!Share to TwitterShare to FacebookShare to Pinterest
Labels: cartoons, Gallant, Goofus, Highlights, marriage, marriage equality, sex, short stories


"Annette Funny Jello" they called her in Mad.

That nickname was a pun on the singer/actress's real surname -- Funicello -- but there was a leering double entendre in the moniker, too, one that commented on the young lady's newly curvy physique. In the few short years between her debut on TV's The Mickey Mouse Club in 1955 and the release of her first hit pop single, "Tall Paul," in 1960, Annette Funicello developed from a plucky, innocent 13-year-old kid sister into a pneumatic, enticing 18-year-old sex symbol.

As tenaciously as her handlers protected her wholesome, virtuous image, those eye-catching parabolas beneath her sweater could not be denied, and a generation of boys (and, quite possibly, dirty old men) fell in instant lust. By 1963, she was starring in the Beach Party films, clad in swimsuits that became less and less modest with each entry in the series. First, her midriff was exposed, and her formidable decolletage was soon to follow.

But always, always, always Annette Funicello remained the "good girl," moral and above temptation. Annette's dual nature -- a virgin's mind in a harlot's body -- fueled male fantasies for years. I would go so far as to say that, when one is recounting the sexual history of the 20th century, Annette Funicello surpasses even Marilyn Monroe in significance. I cannot imagine how many young men first climaxed while thinking of Annette.

In 1960, the same year as "Tall Paul," satirist Stan Freberg wrote and recorded a satirical comedy sketch called "The Old Payola Roll Blues (Parts 1 and 2)" about a sleazy record producer (played by Jesse White) who tries to turn a tone-deaf, frog-voiced teenage imbecile named Clyde Ankle (played by Freberg) into a teen idol by bribing disc jockeys to play Clyde's moronic song, "High School Ooh-Ooh." Freberg's character seems dubious of the whole arrangement but still wants to get as much as he can out of this producer. They start negotiating specifics:


FREBERG: Well, maybe now I can have my adenoids taken out.

WHITE: What, and ruin your amateur standing?!

FREBERG: Well, could you at least get me a date with that Mouseketeer that grew up?

Listeners of the time would have had no trouble identifying that particular Mouseketeer.

By the time I was born, Annette's career was pretty much over. The hit songs and movies had dried up years earlier, and she settled into the life of perfect domestic tranquility as a wife and mother. Her most prominent public role after that was as the celebrity spokeswoman for Skippy peanut butter. Her career ended, then, as it began: with Annette as a paragon of chastity and modesty, utterly sexless and harmless.

But this does not diminish her importance in the sexual awakening of a generation.

Incidentally, that song I mentioned earlier, "Tall Paul," played a small yet significant part in my own childhood. I have written before about how my introduction to popular music came through a stack of hand-me-down 45 rpm records I received from my mother and which I repeatedly and obsessively played on my trusty Fisher-Price record player. Naturally, Annette's hit platter was an important part of the mix. It's an odd-sounding record even today, as fast and choppy as a punk song with very prominent percussion. Give it a listen, won't you?

Gaze, please, at the eyes of two of the most idiosyncratic, controversial and puzzled-about directors in film history, one considered to be among the best in his field, the other among the worst. Obviously, any director's greatest tools are his eyes. After all, every filmmaker is trying to get us to see the world through his eyes.
What do we see in Ed Wood's eyes? What do we see in Stanley's? What do these men's eyes tell us about their films? I think insufficient attention has been paid to directors' eyes. Maybe it could be a whole new branch of film study.
Ed Wood's eyes are those of a man who is handsome in an elegant, old-fashioned way. There is a delicacy to them and a hint of romance, perhaps a bit of femininity. See how the right eyebrow is cocked in a suave, seductive way. Eddie certainly had his share of women in his younger days, and several of them compared his appearance to that of Errol Flynn, a screen icon of the 1930s and '40s known for his swashbuckling roles and playboy lifestyle.
Now look at Stanley's eyes -- dark, intense, serious. These are the eyes of an obsessed man. The thick black eyebrows above jut sharply downward toward his nose, forming a shadowy brow which looms over the bulging orbs. Notice, too, the dark rings which circle them and give him a menacing appearance. Many of Kubrick's lead actors would have similarly intense, formidable gazes -- Jack Nicholson in The Shining, Malcolm McDowell and Patrick Magee in A Clockwork Orange, Vincent D'Onofrio in Full Metal Jacket, and Sterling Hayden in The Killing and Dr. Strangelove -- and Kubrick liked to film these men either from below or from angles in which they stared intently under furrowed brows. Perhaps all of these were self-portraits.
Posted by Unknown at 6:14:00 PM
Email ThisBlogThis!Share to TwitterShare to FacebookShare to Pinterest
Labels: Ed Wood, movies, Stanley Kubrick
Newer Posts Older Posts Home
Subscribe to: Posts (Atom)