There's a ZOMBY within our Borders! 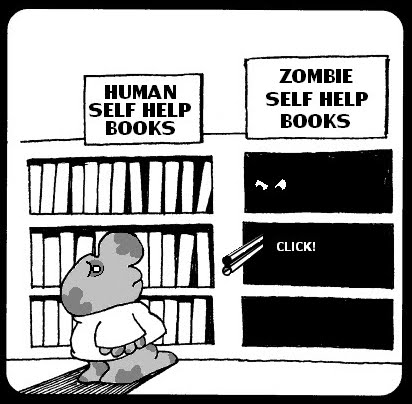 Posted by Unknown at 11:50:00 AM
Email ThisBlogThis!Share to TwitterShare to FacebookShare to Pinterest
Labels: books, cartoons, comics, zombies, Zomby

Dining out with ZOMBY!!! 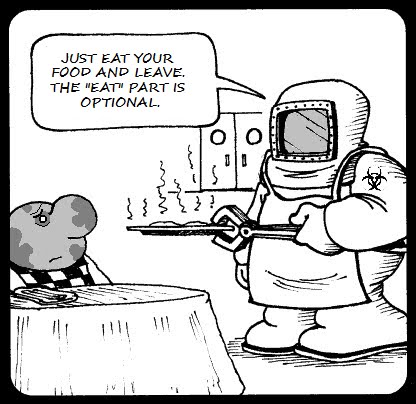 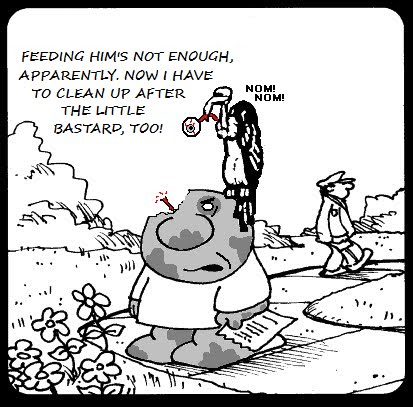 ZOMBY!!! goes to the bank (or something) 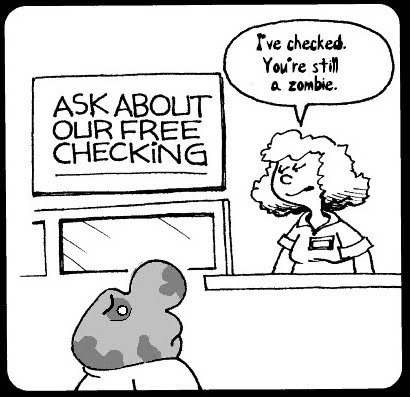 I am pleased to announce that I have made a delightful discovery about the messages contained within fortune cookies. Of course, there is a longstanding comedic tradition of adding the words "in bed" to fortune cookie messages. And I will admit that this is indeed quite funny.

Are "in bed" the only words you can add to your fortune cookie messages? To quote Senator Blutarski, "Hell, no!" Ladies and gentlemen of the jury, I suggest that it is every bit as funny -- if not more so -- to add the words "and shit" to the ends of fortune cookie messages. Allow me, please, to demonstrate.

If you are so desirous, you can find these and many more fortune cookie messages at this fabulous website. (HINT: Just keep clicking "Open a Cookie.") And from there, you may feel free to add "in bed," "and shit," or whatever words you choose to the ends of these brief, hopeful missives.

PLEASE NOTE: When you are reading these fortune cookie messages aloud, do not place undue emphasis on the word "shit," because it changes the meaning entirely. The words "and shit" are intended as an especially informal way of saying "et cetera" or "and so forth." No scatological meaning should be inferred from these messages. Thank you.

Yes, it's nothing but heartache and trouble for our luckless living impaired pal!

Whether he's looking for love... 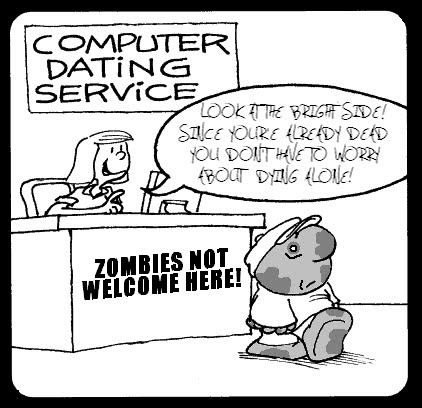 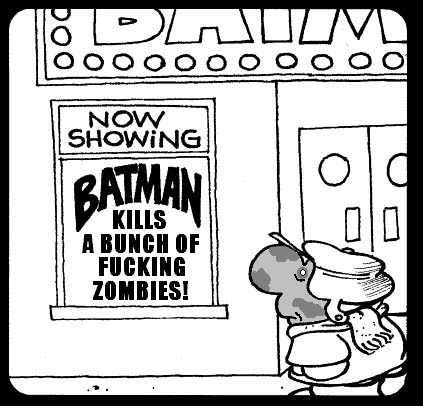 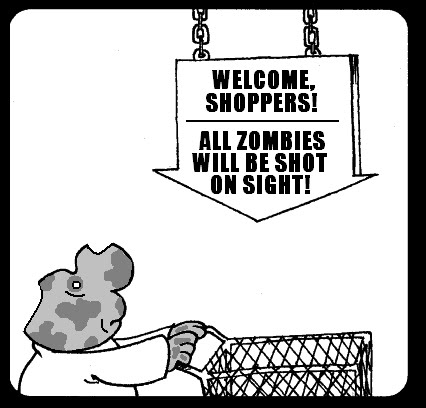 It had to happen eventually... 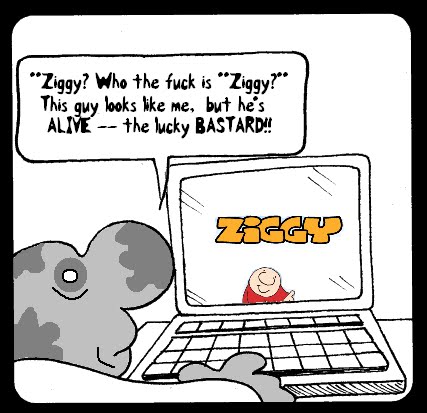 Posted by Unknown at 6:26:00 PM
Email ThisBlogThis!Share to TwitterShare to FacebookShare to Pinterest
Labels: cartoons, comics, The Living, zombies, Zomby

A tribute to a classic... 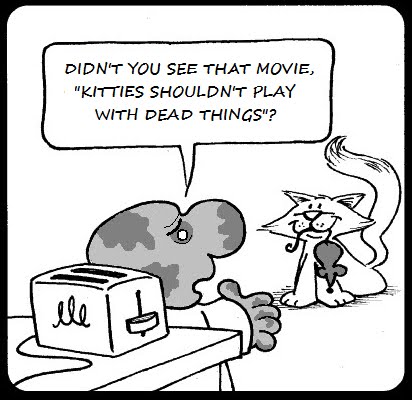 In today's hi-larious installment of Zomby, we see that even Christmas can be less-than-merry when you're Living Impaired... 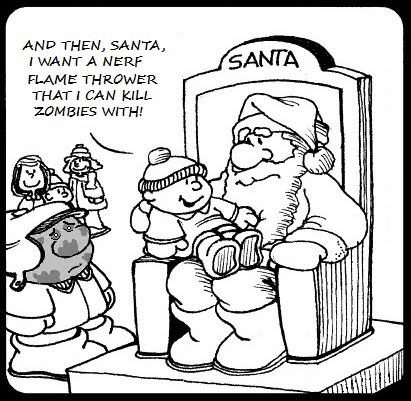 BLOGGER'S NOTE: Is anyone but me amused by this ongoing Zomby series? I wanted to build up this blog's readership or at least maintain a steady audience, and I figured one way to do that would be to have a regularly updated feature, like these cartoons, that people could check in on from time to time. As a longtime reader of the newspaper funnies, this kind of parody interests me... but I am here to serve your interests, not just my own! Please, use the comments section to tell me what you think of this blog and what you'd like to see in this space. Are there living-impaired-related topics you'd like me to cover? I'd really like to know.

And now, for your dining and dancing pleasure, here are two more installments of America's latest cartoon sensation, Zomby... 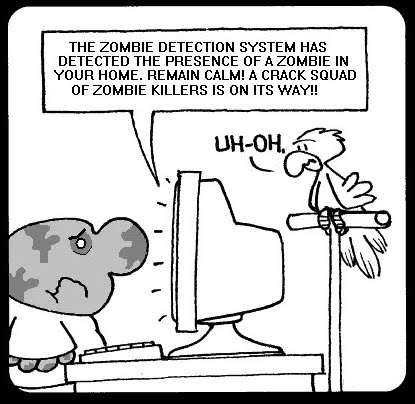 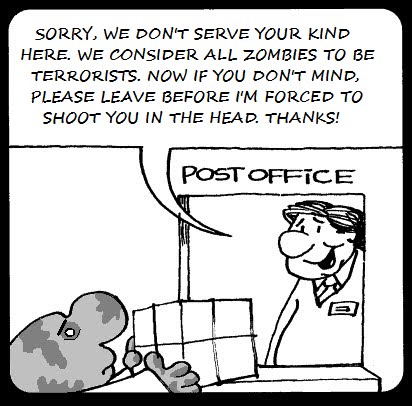 Even after two years plus of appearing on the Mail Order Zombie podcast, I realize that the Living Impaired still have plenty of image problems. I sat down to think about how to solve this problem, when suddenly the answer came to me...

And so, ladies and gentlemen, I'd like to introduce ZOMBY! He may remind you of another Z-named comic character, but this one happens to be living impaired. Through the misadventures of little Zomby, you'll see the various heartaches, frustrations, and disappointments my people deal with on a day to day basis.

Here are a few samples: 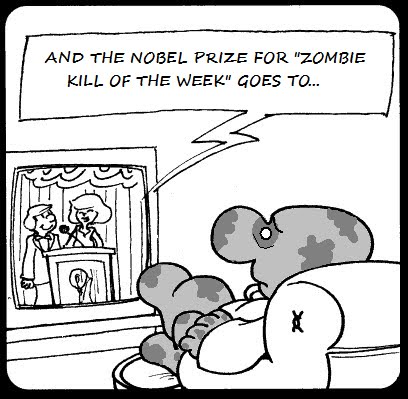 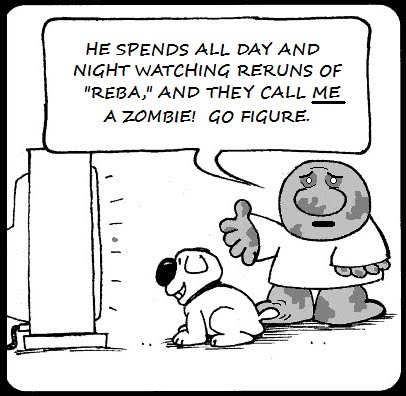 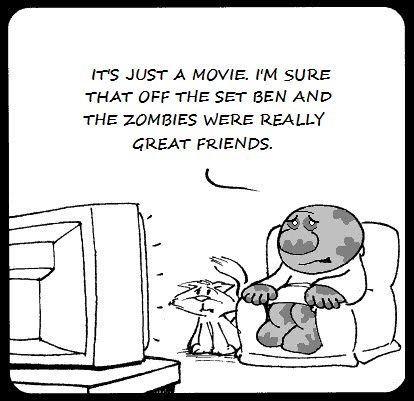 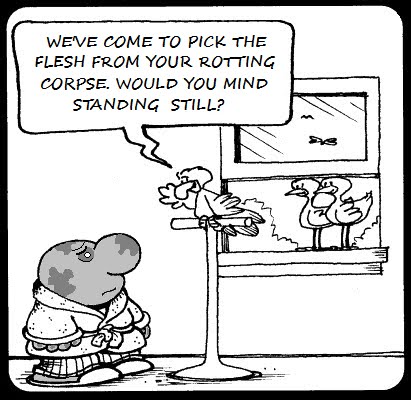 So what did you think? Lovable, right? Adorable, right? I'm picturing a whole line of "Zomby" merchandise -- greeting cards, calendars, plush toys. Besides raising awareness of the plight of the living impaired, this little guy could be a cash cow.

Night of the Living Dead (1968): In defense of Barbara


Never let it be said that I am less than chivalrous. I am stepping in to defend the honor of a lady -- namely the character of Barbara in George Romero's original 1968 Night of the Living Dead, as portrayed so brilliantly by Judith O'Dea. First, here's a quote from Danny Peary's classic 1981 book, Cult Movies which puts her character nicely into perspective:


"Barbara [is] one of the few movie heroines who is not required by cinematic convention to get over the loss of a loved one in five minutes of screen time."


Let us dwell upon a certain ugly truth about human nature: some people are just no damned good in a crisis. They panic. They shut down. They freak out. And I'm not just talking about in horror movies. I'm talking everyday life. I know because I'm terrible in crises. I panic easily and am quick to freak out even in relatively mild situations. I have not once had a successful public speaking experience, and the trauma I suffered during all-school spelling bees could keep a therapist employed for years. If shit ever gets real -- i.e. tornado, fire, flood, hurricane, earthquake -- I will be of no use to you whatsoever.

That's essentially Barbara's situation in Night of the Living Dead. Shit gets real, and she shuts down. Not because she's a woman. Not because it's 1968. It's just human nature -- specifically her human nature. Movie characters don't know that they're characters. They don't know they're being watched by us (the audience), so they don't give a damn about being our role models. Barbara doesn't stop to say to herself, "Hey, if my life is ever made into a movie, women in the crucial 18-49 age demographic wouldn't find it very empowering if I lost my cool right now. For their sake, I'd better get my act together." That would be bullshit. But I think we're so used to pandering, false encouragement from our entertainment that we can't quite process it when Barbara freaks out. I don't know how it happened, but somehow over the years we've expected movie characters to be not only our role models but our imaginary friends and idealized surrogates as well.

Female characters are especially tricky because they operate under what's called the "burden of representation." Let's face it -- most characters in American movies are straight, white, and male. For that reason, you can pretty much depict straight, white males any way you want. Positive, negative, whatever. Your choice. But for anyone other than that, there's the unspoken assumption that any female or minority character is a representative of his or her entire demographic. If Romero depicts Barbara freaking out, therefore, it's taken as a slander against all women. No wonder so many female characters get what I call the "female Rambo upgrade" in sequels. It happened to Ripley in the Alien franchise. It happened to Sarah Connor. It even happened to Princess Leia. And I'll argue that if you trace the progression of female heroines from Night of the Dead to Dawn of the Dead and finally Day of the Dead, you can see that they get progressively "stronger" -- which essentially means more masculine. Even Barbara herself got the "female Rambo upgrade" in the 1990 remake of Night of the Living Dead.

What makes all this necessary is the under-representation of women in film. There are (by far) fewer women than men in movies, so leading female characters especially have to try that much harder to be positive role models. This is a shame, in my opinion. I look forward to a day when characters of both genders are allowed to be themselves, to be human, empowerment be damned.

By the way, to illustrate how badly women are underused in film, I want you to look through your DVD collection and see how many of your favorite movies pass the Bechdel Test, named for cartoonist Alison Bechdel. Here are the criteria:


I don't know how well your movies did. Mine didn't do so hot.

Either way, here's the original Bechdel Test. Note the reference to Alien.

Givin' the public what it wants -- zombie Justin Bieber!

Looking over the always-depressing "stats" for my blog, I see that two intrepid individuals have found this blog by searching for "Dead Bieber images," possibly because of my references to Justin Bieber on Mail Order Zombie. Perhaps these were two separate people. Perhaps the same person tried it twice. I don't know. Either way, I'm all about giving the public what it wants. Here are your "Zombie Justin Bieber" images (none created by me):


I trust these will suffice.

My fellow citizens of the world,

So here we are, five days into the month of December. The glory that was National Novel Writing Month is now but a flickering ember. (You see? That's just the kind of hackneyed metaphor you can expect from us amateur writer types.) In case you were wondering: yes, I finished my novel, meaning that I limped across the 50,000-word finish line before November 30 and dropped to the ground, exhausted. Here, incidentally, is the cover I designed for my book: 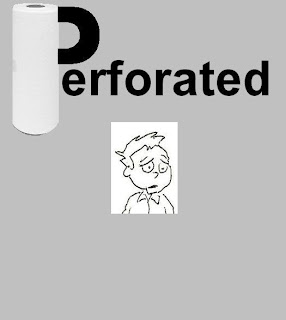 The cover design was inspired by one of Andy Warhol's silkscreens of Marilyn Monroe:

As you can see, the novel I spent a month writing is called Perforated, and it is about the paper towel industry. Specifically, it is a "memoir" written by an advertising mascot named Thirsty Lad. (That's him on the cover.) Essentially, this book takes place in a universe in which advertising characters like Tony the Tiger or the Jolly Green Giant are real and live among humans, somewhat like the 'toons in Roger Rabbit. The book is really meant to be a parody of those quickie cash-in books written by B-list celebrities. I pass by a bookstore on my way to work, and I see these silly, disposable pseudo-books prominently displayed in the window each morning. I guess something snapped in my brain, and I felt the need to parody them as savagely as possible. But I didn't know if I could get 50,000 words out of that premise, so I made it the story-within-a-story. The wraparound story is about how the whole book is actually being written by an insane dentist whose crimes against society are so ghastly, so utterly horrific that they cannot be described. I don't know where the "killer dentist" plot came in, except that I'm afraid of dentists and I'd recently screened both versions of Little Shop of Horrors for an article I'd written on another site.

Anyway, I'm glad to have "won" NaNoWriMo this year, but I mostly learned what not to do if I ever try this again. For one thing, I'm not going to wait until the morning of November 1 to decide on the the subject of the book, and I'm not going to try to improvise an entire novel from scratch with no outline or even a basic game plan. Perforated is an awful mess, probably unreadable, but it does exist. Anyone who is interested in reading it is certainly welcome to do so. Is there some easy, convenient way to post an entire novel on the internet (preferably with formatting)? If anyone has a suggestion, let me know.