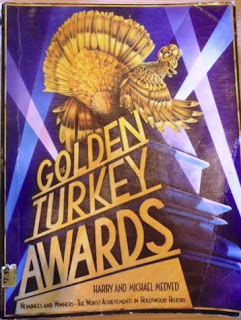 When the Medved Brothers, Harry and Michael, released their book The Fifty Worst Films of All Time (1978), coauthored with Randy Dreyfuss, it contained nary a mention of Ed Wood or any of his movies. In the Medveds' follow-up, The Golden Turkey Awards (1980), that all changed dramatically: Ed seemingly appearing from nowhere to be dubbed the Worst Director of All Time and Plan 9 from Outer Space the Worst Film Ever. Thus, the story goes, began the film's—and its producer/writer/director's— reassessment as "so bad it's good" cult object.

Of course, by 1980, Ed had passed. While certainly aware of the negative reviews of Plan 9 that appeared during his lifetime, he couldn't have imagined the film becoming revered—and for that very reason—within just a few short years of his death. Plan 9 had enjoyed nearly two decades of afterlife in TV syndication before reaching this dubious pinnacle. By the time the first Medved book asked readers to submit their nominations for the Worst Film Ever, receiving 3,000 votes, with Plan 9 from Outer Space the winner, a small following had begun to emerge, shaping the "worst" viewpoint.

This attitude hardly originated with the notorious Medved book. If we dial it back a few years, in soon-to-be-director Joe Dante's serial column "The Frankenstein TV Movieguide" from Castle of Frankenstein magazine (specifically issue 22 from 1974), we see that the "so bad it's good" viewpoint is already fully developed. Dante's capsule review of Plan 9 is delirious, deeming the film an "unalloyed delight," owing to its "rank amateurishness" and incompetence. Ed is a name "to conjure with." Effusively, Dante ends the review: "Wow." Still, he steers clear of the "worst" moniker. 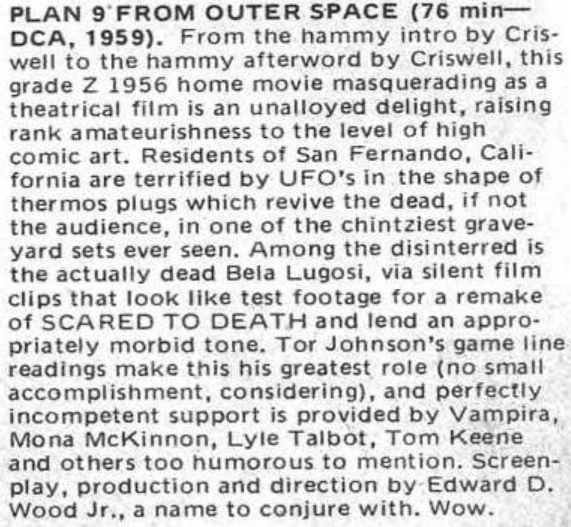 On the index page for that issue of Castle of Frankenstein, the listing for the article mentions two films beginning with the letter P: Psycho and—you guessed it!—Plan 9 from Outer Space. Already, in 1974, the film had begun its reassessment. This prompts some questions:
To which I would answer:
When I found an ad for a showing of Plan 9 in the November 8, 1959 edition of The Sarasota News, I was happy to see the movie playing on a quadruple bill mere months after its initial widespread distribution. One of the Big "Space-O-Rama" showings that night at the Siesta Drive-In, Plan 9 was the only film to play twice on that sprawling bill.

I immediately spotted the lengthy "special note" included in the ad, which turned out to be penned by one of the film's two associate producers: Hugh Thomas, Jr. Like co-producer J. Edward Reynolds, Thomas  was a member of the Southern Baptist Convention of Beverly Hills.

Thomas appears in Plan 9 as as the taller and thinner of two gravediggers, with Reynolds as his stockier companion. He's credited as the movie's sole producer in the ad. His note is simply amazing. Unique details include the mention of another film "we" produced entitled The Peacemaker. Thomas is surely speaking of the low-budget religious propaganda Western from 1956. The word "we" likely refers to Reynolds specifically or to the church generally. In that film, although Thomas and Reynolds were uncredited, they successfully managed to Trojan horse their religious views. Not so with Plan 9, and perhaps that partly explains Thomas' startling decision to run down the film in print, in fact right in an ad for a showing of the film.

Special note about "PLAN NINE" . . . Some months ago we called to your attention we had spent a few years (And numerous dollars) in Hollywood having a fling at making pictures. Our first effort was "THE PEACEMAKER" which we played back in June. Well, now comes another one in "PLAN 9 FROM OUTER SPACE". Not only did I produce it, I had a hand in developing the thin story, and I am even in the darn thing. If you'll study the above ad you will see two grave diggers, that's me on the right. I don't want to be misleading, so I'll just tell you in all honest that the picture stinks!!! It's strictly from corn. There have probably been worse pictures made; but I haven't seen one yet. Anyway, I had a lot of fun making it and you will have more of the same watching yours truly making a vain attempt to copy Marlon Brando, etc. Come down and have a big belly laugh on and at . . . Hugh Thomas, Jr.

The reference to an earlier message from "some months ago" suggests that this note was repurposed from some communication between Thomas and his church. The would-be producer also indicates that the church went to Hollywood expressly with the intent to make films.

Although he remains gregarious overall, Thomas flatly states that the film "stinks." And, yes, for likely the first time in print, he says the magic words: "There have probably been worse pictures made; but I haven't seen one yet."

Echoing these sentiments, it certainly wouldn't be the last time.
Posted by Joe Blevins at 1:05:00 AM