Synopsis: Charlie, a producer-director for Acme Studios, has died tragically -- run over by the very train on which he had reserved a drawing room. But how? Since he had a double indemnity clause in his policy with a $100,000 payout, the insurance company is investigating. Interviewees include: his wife Sheila; a Beverly Hills banker; Acme's head of publicity; a file clerk named Carry Nation; Charlie's secretary Helen; studio honcho Tom Corona; and two "negro barmen" who'd been working on the train that night. The story that emerges is of a philandering drunk whose career was in a tailspin. Charlie had personally financed his last two productions, both of which had bombed. But what's the solution to the mystery? Was Charlie murdered? Was it suicide? An accident?

Excerpt: "He just kept looking bleary-eyed into his glass and when it was empty he always shoved it right out for a refill. I never did see no man who could put down that much Scotch… any whiskey for that matter, in such a short time as he did. But he was a sad man."

Reflections: "Where Did Charlie Get on the Train?" is a story that stands out in the vast Ed Wood canon for a number of reasons. For one thing, it is presented like a mystery that the reader is supposed to solve, with clues along the way and a section labeled "CONCLUSION" at the end. The idea here, I believe, is that we should be following this investigation and making our own deductions based on the testimony of the witnesses. Personally, I got so bogged down in the details, such as the fact that Charlie preferred Teacher's Scotch, that I didn't come close to cracking the case.

"Charlie" is also noteworthy because of its obvious cinematic influences. The train, the double indemnity clause, the dogged insurance investigator -- these are all elements cribbed from Billy Wilder's Double Indemnity (1944), based on the James M. Cain novel of the same name. I can imagine Eddie watching Wilder's film on late night TV and suddenly being inspired to write this story. Overall, though, this story reminds me more of Citizen Kane (1941), directed, co-written by, and starring Ed's idol Orson Welles. Like Kane, "Charlie" consists of a series of interviews with people who knew a once-powerful man, and we get to know this man only through their testimony. If there was a "Rosebud" in Charlie's life, we never find out what it was.

This story is also one of Eddie's behind-the-scenes looks at the movie business, specifically the world of big budget studio films. There's quite a bit of talk here abut marketing and financing of motion pictures. Eddie would have been about 20 years removed from his brief stint at Universal when he wrote this story. By 1971, he was already deeply ensconced in softcore and hardcore pornography. So I'd imagine his take on the movie scene in this story is a combination of distant memories, Hollywood gossip, and Ed's own fantasies.

P.S. In its original published form, "Charlie" was given a rather lavish two-page spread with artwork depicting Charlie, the train, and some sexy gals (presumably some of the many women in Charlie's life). Take a look. 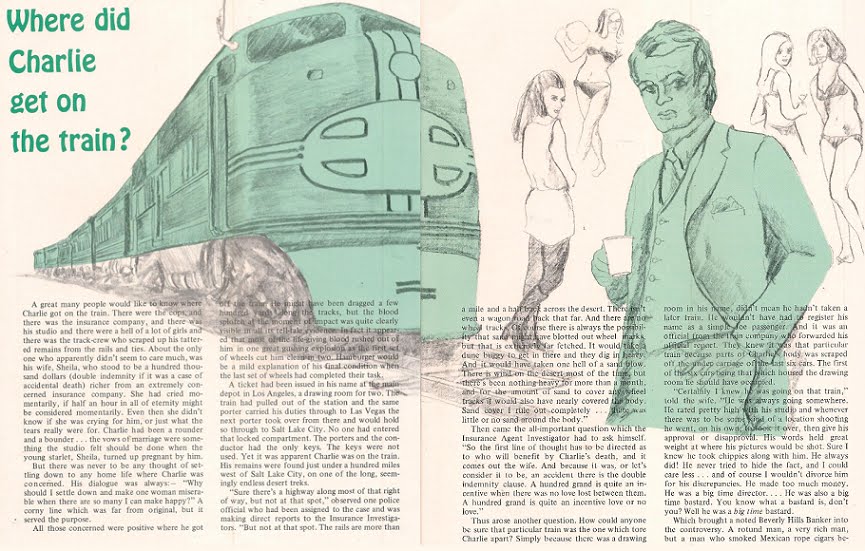