The saga of Rex Morgan and Brother Almonzo


There's no easy way to say this, so I'll just say it. I read the comic strip Rex Morgan, MD every single day. Yes, I know that this is shameful. Yes I do it anyway. There's not much to this strip. Rex is a doctor. He's married to a woman named June. He has some really creepy kids. The cast is rounded out by various patients, people who work in Rex's office, and assorted friends and relatives.

Anyway, in his most recent adventure, Rex is investigating some phony spiritualists who claim to be able to heal people. He attends some kind of vaguely New Age seminar and recognizes one of the con artists, Brother Almonzo, as being Rene Belluso, an art forger from a story that happened several years ago. Rex takes Brother Almonzo aside and tells him the jig is up. In his desperation, the conman tries to bribe Rex. And then this happens:

That's right. Rex Morgan, a doctor, threatens to rat out Rene to the mob. He also jabs him in the clavicle. Mark Trail has the vaunted "right fist o' justice," and Rex has the "left index finger o' justice." This is about as badass as Rex gets, and it inspired me to do the following parody.

And then, as I am wont to do, I came up with some alternate punchlines.

I knew this was going to lead to some role reversal.

Ultimately, I had to go biblical with this. 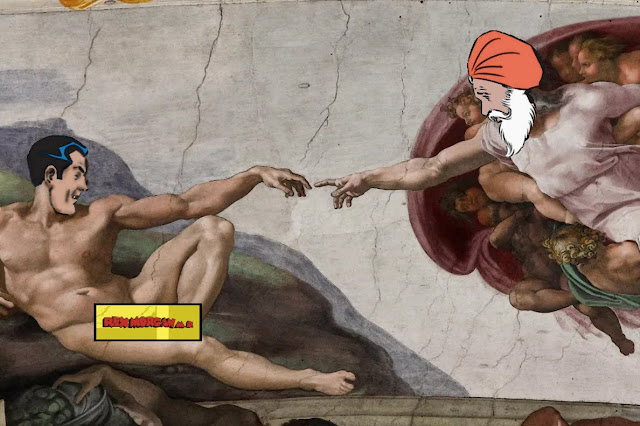 That's it. Got it out of my system. Okay you can go back to whatever you were doing.