A few months back, we took a glimpse at Valda Joanne Hansen, the blonde ingenue who unforgettably played the White Ghost in Ed Wood's Night of the Ghouls (1959). Though she was a delicately beautiful young woman with an otherworldly presence, relatively little has been written about her. And what has been written is contradictory. Depending on what you read, she either met Ed backstage at a play in which she was performing or was his 16-year-old neighbor. This week, we're going back in time to visit Valda and her family before she met Ed, whenever that may have been.

In Rudolph Grey's Nightmare of Ecstasy, Valda Hansen claimed to have been "16 and innocent" when she worked on Night of the Ghouls. She repeated that story in the 1992 documentary Flying Saucers Over Hollywood. Yet the historical records show that Valda was born on November 3, 1932 in Artesia, California, suggesting she was probably in her mid-20s when she first encountered Ed Wood in the 1950s.

Valda's parents, Valdemar and Francine Hansen (née Gero), appear to have had only one child. Since these two were married on May 5, 1932, it means that Francine was already about three months pregnant with Valda when she became Valdemar's wife. By 1940, the family was living on a farm in Downey, about 13 miles southeast of downtown Los Angeles. In the census that year, Valdemar listed his occupation as a "milker." A decade later, we find the Hansen family in the same geography: the suburbs southeast of L.A., in Bellflower, roughly halfway between Norwalk and Compton. By then, Valda was attending the segregated Excelsior Union High School in Norwalk.

These were years of Cold War tension and an escalating arms race. The Excelsior Union High School yearbooks, the El Aviador from Valda's junior and senior years—1950 and 1951, respectively—play off the atom bomb in a surprisingly lighthearted manner, with cartoon drawings of mushroom clouds and pictures of Lockheed Martin planes. That aerospace defense company was doubtless a principal employer in the suburban Bellflower/Norwalk area.

By the 11th grade, in addition to being a member of the Friendship Committee and the California Scholarship Federation (a West Coast version of the National Honor Society), Valda was a class officer and played the title in the junior play, Kurtz Gordon's three-act comedy Henrietta the Eighth. By her senior year, those school activities appear to have ceased, though Valda's star-making yearbook photo anticipated her post-high school modeling career.

After graduation, Valda went on to work for the modeling agency of actress Rita La Roy, who was a staple of the local L.A. television market in the '50s and '60s and thus a contemporary of Criswell. A memorable photo of Valda appeared in the November 23, 1952 edition of the Long Beach Independent Press-Telegram. This same paper was the original publisher of Criswell's columns and rapidly syndicated them, including both his predictions and his Dear Abby-like advice, six days a week.

The photo of Valda, taken in front of Simms Park Auditorium in Bellflower, is perhaps also anticipatory. The coincidence is striking. It features the young woman—now a blonde—in a "rabbit skin" bikini. She's promoting a "two-day Rabbit Raisers School," including a "rabbit pie banquet." The bikini in the photo is clearly furry. Rabbit fur is best and most affectionately known, especially to Ed Wood obsessives, as angora. 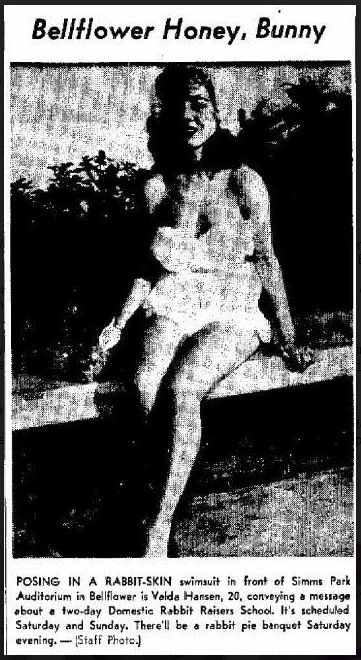 BONUS: There's a passel of Valda Hansen images, including a shot of the young actress in her high school play, right here at the Ed Wood Wednesdays Tumblr. Enjoy.