There's no doubt that actor Conrad "Connie" Brooks (1931-2017) was a major player in the Ed Wood saga. Born Conrad Biedrzycki in Baltimore, he was a key member of the Wood repertory company in the 1950s, back when Eddie was making such classics as Glen or Glenda (1953), Bride of the Monster (1955), and Plan 9 from Outer Space (1959). Conrad's bald-pated brother, Henry Bederski (1910-2003), appeared in some of those familiar movies as well. As I wrote back in October, Eddie's very first directorial effort after moving to Hollywood might well have been 1948's Range Revenge, a modest Western vehicle for Conrad and Henry.
For decades, Conrad was skeptical about the value of those movies he made with Ed Wood in the '50s. But after attending some sold-out Plan 9 screenings in the wake of The Golden Turkey Awards (1980), Connie saw the light. He got back into acting in the 1980s and started writing and directing his own films in the 1990s, including titles like Blood Slaves of the Vampire Wolf (1996) and Jan-Gel: The Beast from the East (1999). He kept directing well into the new millennium and was acting right until the end of his life. He was not someone I ever really looked into, however, at least not until recently. I screened some of his '90s opuses a few weeks ago, and they were at times fun and even surreal. That is, if you enjoy that kind of garage cinema.
Some say that Conrad Brooks was shamelessly cashing in on his connection to Ed Wood, but I don't agree. Connie's enthusiasm for his work seemed genuine. He was a staple of the convention circuit in his later years, and the Ed Wood fans who got to know him personally found him to be fun, energetic, and gregarious. (Side note: I wish I'd been more into those conventions back in the '90s. I mean, Russ Meyer and Jesus Franco?!) And if Conrad was trying to "get rich quick" by riding Eddie's coattails, why did he eventually leave Hollywood and return home to live in his ex-wife's trailer?
In his later years, Connie became something of an evangelist for Ed Wood, seemingly always ready to give an interview about his former employer and friend. I've been combing through some of those interviews lately, and I'd like to share a few with you today.
I'll start with this article by Chris Kaltenbach from the July 7, 1994 edition of The Baltimore Sun. That was around the time of Tim Burton's biopic Ed Wood, and Connie was to be a guest of honor at the Baltimore Film Festival. Although reverential to Brooks, the article is very much in the Golden Turkey tradition and includes the canard that the flying saucers in Plan 9 were paper plates. Apart from a mention of Connie appearing in some Bowery Boys movies, this is a very basic primer on the Wood cult. 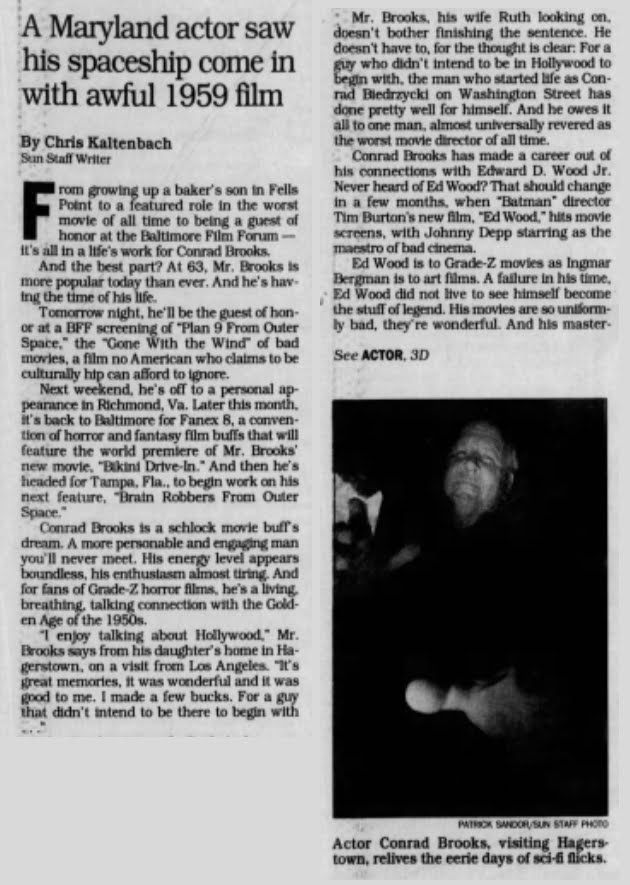 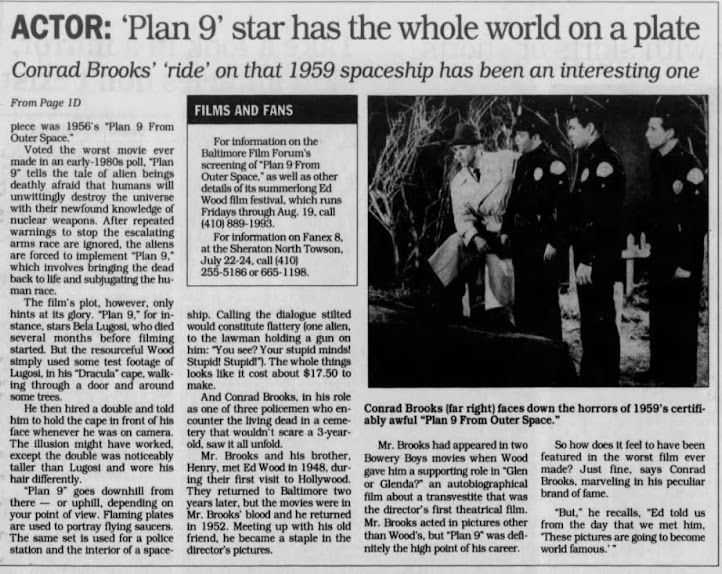 Let's jump forward a couple of years to an article by Mark Voger from the October 25, 1996 edition of The Central New Jersey Home News. The  Halloween season, naturally, is a fertile time for Ed Wood articles. You'll notice that this one has a much more fanciful layout, including pictures from Plan 9, Glen or Glenda, and Burton's biopic. Funnily enough, in the Glenda cast picture, Henry Bederski is incorrectly identified as being Conrad! In reality, Connie's the bearded fellow on the left.
But the article -- written to promote Connie's appearance at a Chiller Expo -- has some interesting information in it, too. Brooks talks, for instance, about wanting to play himself in Ed Wood, only to be told he was too old for the part. And Connie mentions that he and Harry suspected Ed Wood had Bela go into rehab as a way of drumming up free publicity for Bride of the Monster. 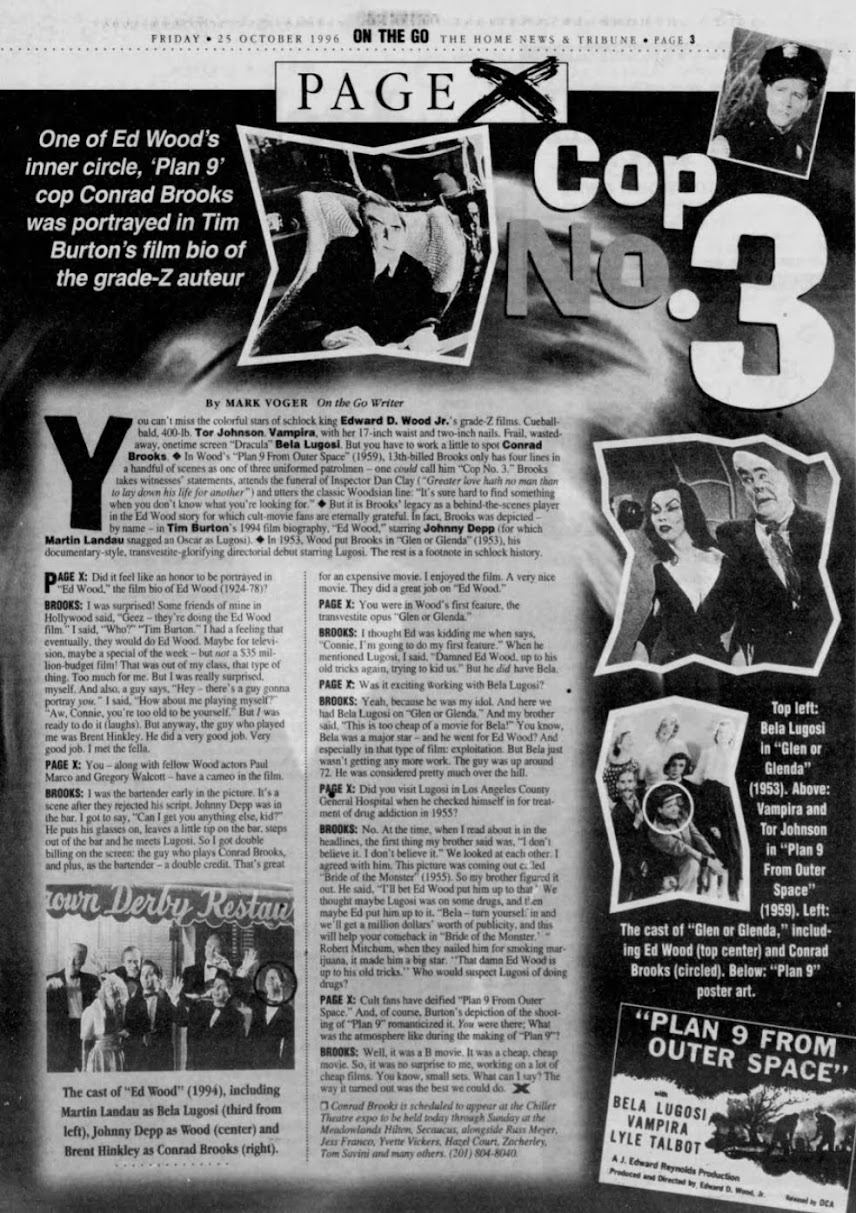 Let's close out this survey with an article from 1998. This was a wire service piece by Joann Loviglio of the Associated Press. For whatever reason, it turned up in The Montana Standard on Christmas Eve. A photo caption says that Conrad is holding a poster for Ed Wood, but it's actually from the eccentric documentary The Haunted World of Edward D. Wood, Jr. (1996), in which Connie is interviewed while dressed as a cowboy.
The Associated Press article, filed from Hagerstown, MD, is another fairly standard primer on the films of Ed Wood and the campy "so bad it's good" phenomenon. What's interesting here is that this story actually mentions some of Conrad's non-Wood credits. It also includes a few soundbites from a man named Gary Svehla, identified as "a publisher of books about horror and sci-fi movies." Gary's produced a number of showbiz documentaries since then and has a robust bibliography as well. Hard to believe this was 22 years ago. 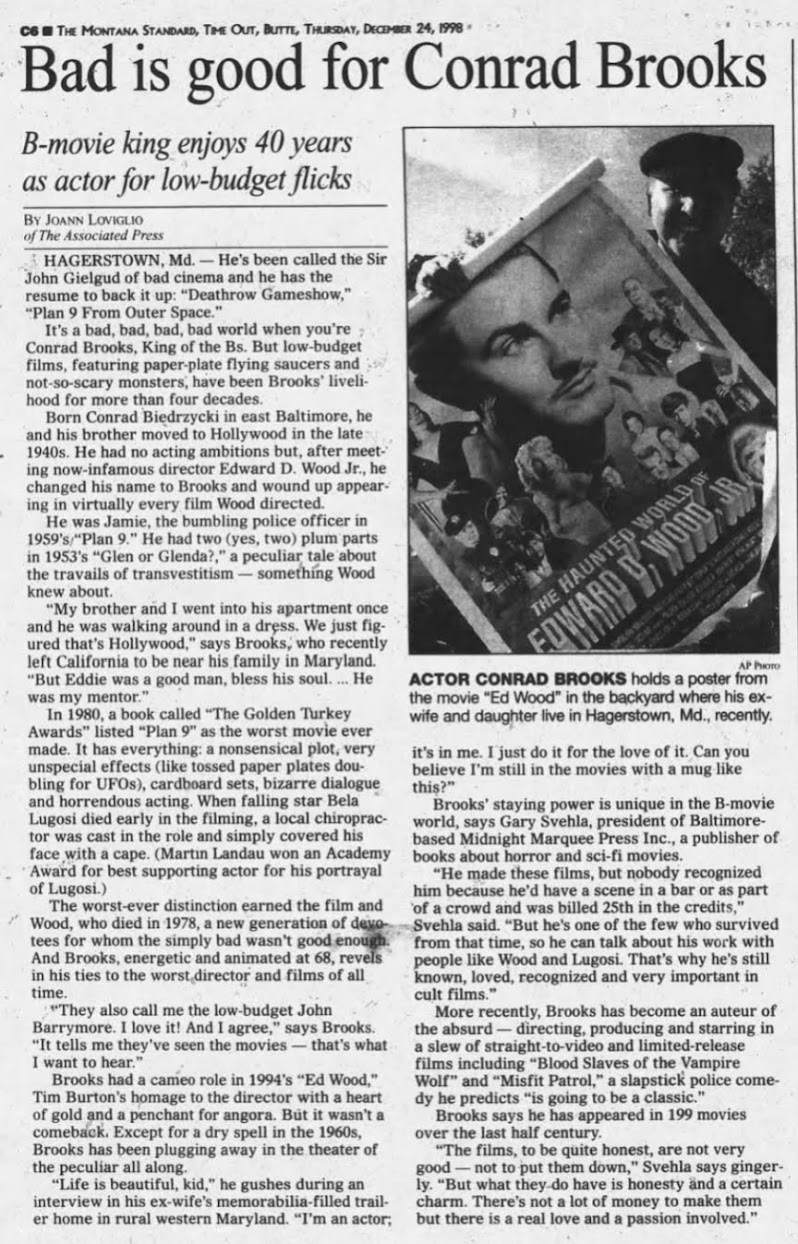