"And above all, never forget that the pen is mightier than the plow-share. By this I mean that writing, all in all, is a hell of a lot more fun than farming. For one thing, writers seldom, if ever, have to get up at five o'clock in the morning and shovel manure. As far as I'm concerned, that gives them the edge right there."

-Michael O'Donoghue, "How to Write Good"

A commonly-repeated anecdote about the late gonzo journalist Hunter S Thompson is that, while working for Time magazine in the 1950s, he used to retype pages from F. Scott Fitzgerald's The Great Gatsby (1925) verbatim, just so he would know what it felt like to write a great novel. While I have never gone to quite such lengths, I have wondered what it would be like to inhabit Ed Wood's skin -- or at least his apartment -- for an afternoon or so. What must it been like, for instance, in those desperate, whiskey-drenched days of the early 1970s when Eddie would drag himself back to his trusty typewriter in order to bang out yet another short story for one of Bernie Bloom's pornographic magazines?

I'd like to think that, despite his ever-worsening circumstances, Ed was able to will himself into an inspired artistic trance when he wrote these stories. The muse inhabited his ruined body and guided his ten furiously-typing fingers. Though he needed quick cash to keep his landlady at bay and settle his tab at Pla-Boy Liquor, conveniently located just down the street from his profoundly-sketchy flat at the corner of Yucca and Cahuenga, Ed Wood was never wholly a mercenary. It just wasn't in his DNA.

Whatever you may think of him, Eddie was an artist. Even when he was writing pornography, he made it his own. That's why I've kept such careful records of the themes and motifs that dominate his work. Eddie may have assayed a half-dozen different genres in his novels and stories, but the only writer he could really imitate was himself, just like Hunter S. Thompson ended up developing his own unique writing style, even though he apprenticed for his trade by literally imitating F. Scott Fitzgerald. Everything Hunter wrote came out sounding like Hunter, not Fitzgerald, and everything Ed Wood wrote came out sounding like Ed Wood.

I do not and cannot write like Eddie did. That's neither a boast nor an admission of failure, just a fact. I've spent many hours with Ed Wood's work over the last couple of years, but I can't really channel the man. Lots of people have tried -- look at the tribute films I've covered in this series -- but Eddie has proven stubbornly inimitable. If you'll remember, one week of this project was actually given over to an original short story, written by me and inspired by Plan 9 from Outer Space, but there's nothing particularly Wood-ian about it in terms of structure or vocabulary. For better or worse, that story is me, not Ed.

But that doesn't mean I've given up trying to invoke or evoke the spirit of Edward Davis Wood, Jr. This will sound ridiculous, but I have actually gone so far as to price angora sweaters, just so I can wrap one around me when I write. Similarly, I don't drink, but I've considered taking up the habit, just so I can feel closer to Eddie whenever I need to. I mean, alcoholism was one of the central facts of his life. It affected so much of what he wrote, including this week's story. How can I possibly hope to understand that "glow" Eddie claimed to get from booze, unless I sample a little of it myself now and again?

For the time being, I am not going to become a drunk or an angora fetishist in the name of research. Instead, what I have done this week is to faithfully transcribe a complete short story from the early 1970s by Edward Davis Wood, Jr., right down to those idiosyncrasies in punctuation and grammar. When Eddie conjugates the past tense of "sink" as both "sank" and "sunk," for instance, I have let it stand. In actuality, typing up this story did fleetingly make me feel a little like the man whose life and career I've been faithfully over-analyzing the last few months. I liked the feel of these words emerging from my fingertips. Ed wrote with a lot of verve and energy, and I felt a little of that vicariously. This is an erotic werewolf story -- and, yeah, I know how that sounds -- from the same era of Eddie's career as the short stories in Blood Splatters Quickly: The Collected Stories of Edward D. Wood, Jr., the anthology I reviewed at length and in detail late last year.

"Howl" was not one of the stories in that invaluable omnibus, but it would have been right at home there. Many of the classic Wood-ian motifs are present in this tale. Sex and death are intertwined in the most literal way possible. (You'll soon find out what I mean.) Mention is made of full moons, graves, snakes, dildos, and negligees. Breasts are again fetishized. The animal instinct lurking within man is once more given free reign. Yet another one of Wood's frustrated career gals -- in this case, a restless secretary -- seeks solace in nature, only to learn too late that salvation is impossible in this fallen world. And, naturally, our heroine's drinking habits are much-discussed. (Wood's potent potable of choice, whiskey, is a key prop in this story.)

As for a deeper meaning, I'm stumped. Is this a puritanical story about a female libertine paying for her "sinful" lifestyle? Is it a cautionary tale for young women, warning them to be on the lookout for predatory males? Or is it perhaps a quasi-feminist work, presenting a sympathetic female character who just wants to be taken seriously without sacrificing her own pleasure? Maybe it's all of the above. Read on and decide for yourself.

It was the constant howling which unnerved Rita. It hadn't ceased since the moon became full. She rolled over on her bed and looked to the bright moonlit window ... then she cringed again as the eerie howl seemed to fill the entire night. There was no other sound ... and it seemed closer ... almost as if it were right outside the window.
For a brief moment she thought about closing the window. But that would have made the room impossible. It was stifling even with the window open, it would have been a complete furnace closed. 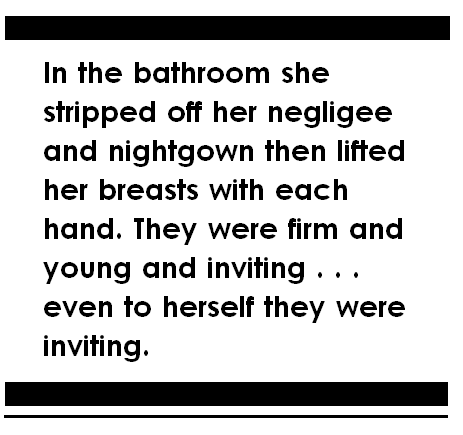 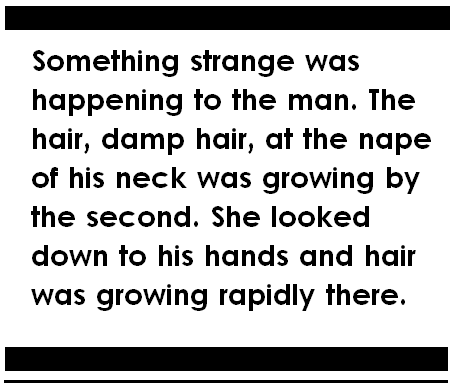 At first it was only a crescent, but the yellow glow was quickly forming into the perfect ball it would soon be. The moon was following the sun around the earth. Soon it would be full, and clear in the deep black velvet of the night.
Kent stared at the coming event, and the corners of his eyes began to twitch. At the same moment Rita felt the change in her lover. She pulled away slightly and looked at him, but his eyes were fastened to that void beyond the door.
"What is it Kent?"
He did not answer her. In reality he had not even heard her words. His hands dropped to his sides as he turned full to face the open door. Momentarily Rita stepped around in front of him but he didn't seem to realize her presence. She moved back more to the center of the room. Her eyes dropped to the rifle, then once more raised up to the back of Kent's head.
Something strange was happening to the man. The hair, damp hair, at the nape of his neck was growing by the second. She looked down to his hands and hair was growing rapidly there. His shoulders seemed to broaden and become slightly hunched forward giving his back a rounded appearance.
"What is it Kent? What's happening?"
Still there were no words from the man, but she could hear his sudden heavy breathing and a slight gurgling sound which drifted up through his throat. His back was to her and it heaved heavily. He began to pant like a dog in heat.
Fright built itself quickly in Rita's heart. She snapped up the rifle and aimed it at his back, but she did not fire. "Kent. I want to know what is happening!"
Her breasts popped in and out of her open blouse front with every panicky breath she took. She bit at her trembling lip. One hand left the rifle to brush the hair out of her eyes, then went immediately back to steady the weapon.
Kent threw his head far back and the howl of the wolf filled the entire room and it was only topped by the piercing scream which issued from Rita's throat ... Then she fired shot after shot from the rifle. She saw each of the bullets strike their mark in the creature's back. The rifle then locked in silence when the last shot was fired. She screamed again and the rifle fell from her hands. Her eyes went wide in terror as the creature turned to face her ... The lips parted to reveal the flesh tearing fangs and the drooling saliva which flowed over the corners of her lips. His face was completely covered in hair ... the gray-brown hair of the wolf ... of the werewolf.
He snarled, then wailed again. His hands went up high as he started in for the kill.
"None but the silver bullet can kill a werewolf," she heard herself realizing as the claws tore her clothing from her body. She tried to turn and run but the claws dug into her flesh in long jagged, blood letting cuts. Then she was on the floor and he was on top of her. He felt his muscle enter her and he pumped explosively at her over and over again until that final moment of climax ... and at that moment of climax his fangs tore into her throat ...
She died with the scream and the blood gurgling in her throat, and her thighs quivering from the effects of that last climactic explosion.