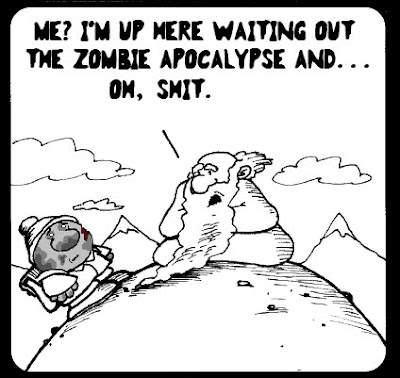 AUTHOR'S NOTE: A seeker of truth scales a mountain in order to consult the wisdom of an old bearded guru who sits cross-legged at the peak. For many years, this was a standard scenario for both comedy sketches and gag cartoons, but nowadays I think Ziggy and maybe The New Yorker are the only ones keeping it alive. Did you know there was even supposed to be a "mountaintop guru" scene in the first Willy Wonka movie? Here's the anecdote which has appeared on many Wonka and movie trivia sites:

During the world-wide rush to get the golden tickets, a mountain climber goes to the top of a mountain to see a guru. He asks, "What is the meaning of life?" "You got Wonka bar?" asks the guru. The climber hands him a Wonka bar. The guru unwraps the bar, and finds nothing. The guru says, "Life is a disappointment." Nobody laughed at it during a screening, so the director Mel Stuart showed it to a psychologist. The psychologist said "Nobody laughed, because for many people, life IS a disappointment." So the scene was cut.