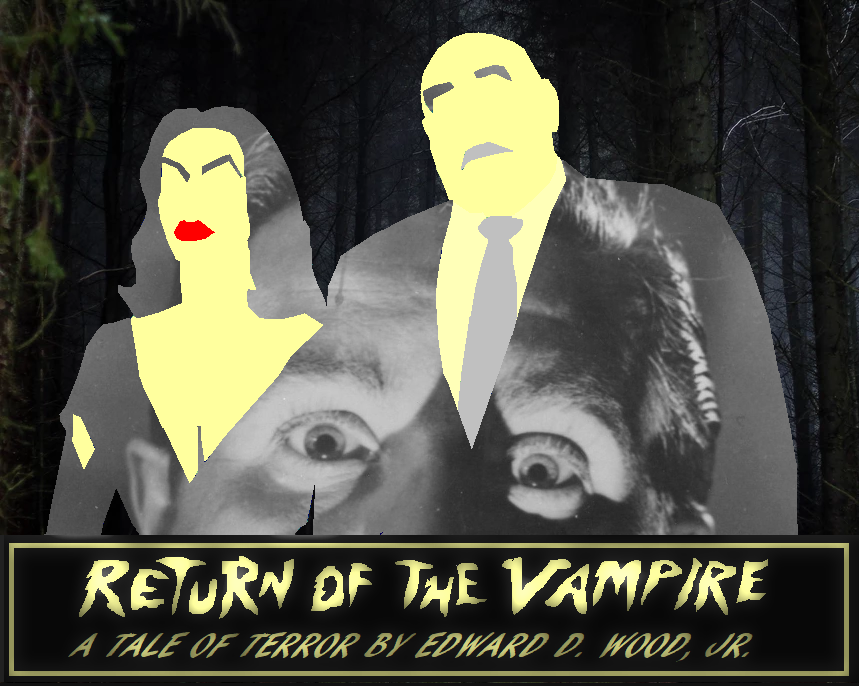 Movie trivia experts love to quote the statistic that Bela Lugosi only played Dracula twice onscreen -- once in the original Dracula (1931) and again in Abbott & Costello Meet Frankenstein (1948), both for Universal. But, in truth, Lugosi played variations on Dracula for decades. He was so identified with the character that it's almost impossible not to see elements of the Count in every role he played subsequently, including his three assignments for Edward D. Wood, Jr. Supposedly, the script for Plan 9 from Outer Space (1959) refers to Lugosi's Ghoul Man as "the Dracula character." I can neither confirm nor deny this, since I've never seen the Plan 9 script.

One of Lugosi's most memorable post-Dracula films is 1943's The Return of the Vampire, a Columbia production directed by journeyman Lew Landers. Set in England, as was most of Dracula, this atmospheric horror classic has Lugosi as a very Drac-like vampire named Armand Tesla, who assumes the identity of scientist Dr. Hugo Bruckner. Note that Lugosi's characters in Glen or Glenda (1953) and Bride of the Monster (1955) are both scientists, one a little cranky and the other outright mad. Armand Tesla also has a werewolf henchman, which may have given Ed Wood some ideas when he wrote Orgy of the Dead (1965).

As it happens, The Return of the Vampire shares its title with one of Ed Wood's short stories from the 1970s. Although this particular tale was not included in Blood Splatters Quickly (2014) or Angora Fever (2019), it would have fit in easily in either anthology, and it's a perfect Wood tale for the Halloween season.

Synopsis: A woman named Mina lives in a gloomy coastal mansion with her ailing husband Jonathan. She inherited the place from her friend Lucy, but she wants to move for her husband's benefit. Jonathan had been committed to an institution and was only allowed to leave under the condition that Mina marry him and become his caretaker. She loves Jonathan but admits he is not doing well here and is even too weak to make love to her.

One stormy night, Mina decides to seduce Jonathan by wearing her sexiest nightgown. At first, he is cold and unresponsive, but soon he warms up and starts making passionate love to her. Suddenly, Jonathan and Mina have anal sex for the first time, which Mina finds both painful and pleasurable. Afterwards, she hears Jonathan moving around the bedroom and getting dressed, but she has no idea where he could be going. While Mina wonders about what has happened to Jonathan, a vampire appears in the bedroom and rapes her. This is the same brutish, screeching creature that Jonathan had described when he was in the institution.

Still reeling from this experience, Mina goes to the tomb below the mansion to search for Jonathan. She finds him there, making love to the deceased Lucy! To Mina's horror, Lucy comes back to life and sinks her fangs into Jonathan's neck. Mina knows her husband is lost to her now and awaits the next appearance of the vampire.

Excerpt: "I waited not a moment. I didn't bother to even seek out my negligee which must have fallen to the floor… I didn't bother to wrap the shreds of my torn nightgown around my naked body and indeed the bodice was completely torn beyond repair. I simply let the material hang as I raced out of the bedroom and into the sitting room where darkness once more was the center of attraction."

But can we say that Eddie only reluctantly included the sexy parts when he would have preferred to write straightforward, non-pornographic Gothic horror? Eh, I don't think so. Eddie's sex scenes, here and elsewhere, do not seem obligatory, desultory, or perfunctory. On the contrary, Ed writes these with a lot of enthusiasm, and he works his own desires into the text whenever possible. In this story, for instance, there is a lot of attention paid to nighties and negligees, and Mina makes sure to tell us how "sheer" her nightgown is. Wood's fans will immediately be reminded of the notorious "department store" scene from Glen or Glenda, in which the hero(ine) goes shopping for sheer nighties and manages to horrify the snooty lady behind the counter.

So, then, "Return of the Vampire" can be described as a synthesis of Ed Wood's interests and passions. In short, this story is Ed Wood!
Posted by Joe Blevins at 2:31:00 PM