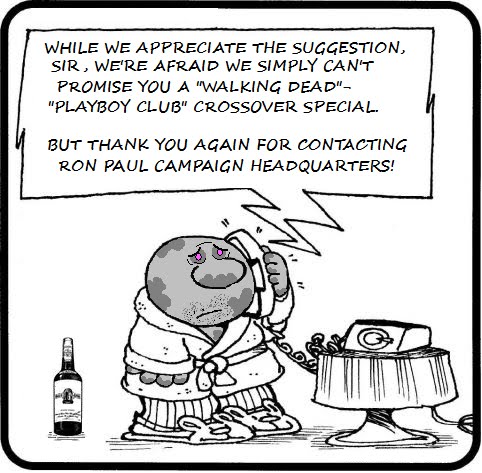 One of the nice side effects of the extreme repetition of Ziggy is that it occasionally allows me to do small-scale story arcs. If Tom Wilson II does jokes about the same topic or uses the same settings for several days in a row, I try to turn it into a miniature plot. Back in February, for instance, I did a little story about Zomby's romance with a generic female functionary. And more recently, I did several cartoons about the ominous birdpocalypse. If Tom Wilson does more cartoons with Ziggy hanging around his house in a bathrobe in the next few days, I will continue to explore Zomby's spiral into depression triggered by NBC's cancellation of The Playboy Club. Of course, though, I'm completely at the mercy of Tom Wilson in this regard. If he changes course, so do I.

(Incidentally, the mention of Ron Paul was triggered by the fact that several of the man's campaign ads have mysteriously appeared on my blog in the last few weeks. Why Ron Paul would advertise here is beyond me. As a leader of Dead 2 Rights, I do not and cannot endorse any candidates. But I can now admit that Michelle Bachman and I used to party together in the '90s. Hard. Oh, how that woman could party.)

But getting back to the topic of comedic repetition... 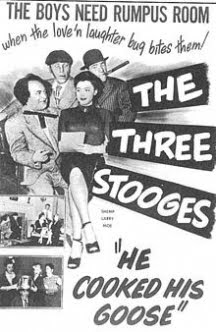 He Cooked His Goose (1952) is one of the oddest Three Stooges shorts I have ever seen. It's the 140th of the 190 films they made for Columbia, and it's interesting to see how eager the boys were to experiment with the tried-and-true Stooge formula at this (relatively) late stage. It's the product of two Stooge stalwarts, writer Felix Adler and director Jules White, though Adler's writing is more adventurous than White's workmanlike directing. He Cooked His Goose is one of the rare Stooge shorts in which the lead role goes to Larry Fine, a very gifted comedic performer normally relegated to the part of victim. Not only is Larry the star, he gets to be evil in this one! He plays a lying, scheming, womanizing pet food supplier and does a great job with the villainous role. For this part, Larry gets a few special accessories from the prop and wardrobe departments, like a giant cigar and an oversized bow tie. (For whatever reason, he also has a trained clam named Cedric.) He even gets his own little music cue that pops up every time he has an evil thought!

Moe and Shemp (yes, this short is from the Shemp era so don't expect to see Curly) are also brilliantly cast against type in He Cooked His Goose: Shemp as the film's romantic hero and Moe as a passive, gullible klutz who is actually being cuckolded by Larry! This is one of the few Stooge films in which the boys are not playing any kind of a team. They're not brothers, coworkers, partners, teammates, etc. in this short. The Stooges are playing completely separate roles for one of the only times in their career. Larry and Shemp are romantic rivals, while Moe is a stranger to both of them! Stooge regular Mary Ainslee is also quite good here as Moe's wife (and Larry's paramour) Belle.

So please enjoy He Cooked His Goose. Along with the plot details described above, you also get a glimpse into American life circa 1952, back when door-to-door salesmen still existed and telephones were of the rotary type. You also get to see what Christmas trees and Christmas lights of that era looked like. Even some of the film's expository dialogue has a lost-era charm, as when Shemp gushes to Larry, "Oh, this'll make my Christmas dandy!"

Here's the short film on Veoh:


Watch He Cooked His Goose.divx in Entertainment | View More Free Videos Online at Veoh.com
Posted by Unknown at 5:04:00 PM